The Legal Defence and Assistance Project (LEDAP) in partnership with the National Committee against Torture (NCAT) are undertaking a project in Nigeria funded by the United Nations Democracy Fund (UNDEF) with the aim of tackling the use of torture and SGBV in policing. The project is located in Lagos, Adamawa and Yobe states and is anticipated to spill over across to 12 other states. The overall objective of the project is to reduce incidences of torture and improve access to redress for victims of torture and ill treatment. The strategy of the project is to address the specific problems of both the supply and demand side on torture prevention.

On the supply end, which is the side of the police and law enforcement officials. The project will seek to train about 7,300 police officers and other law enforcement officials, through collaborative peer training on torture prevention strategies, human rights and sexual and gender-based violence (SBGV) norms. The project will produce in partnership with NCAT, a National policy on torture prevention in Nigeria. The national policy will articulate Nigeria’s obligation and commitment on prohibition and encourage the full implementation of the Anti-Torture Act 2017.

While, on the demand side of human rights, the project will train about 330 representatives of CSOs (180), Lawyers (50), Journalists (20), Paralegals (80) to report and support survivors and victims of torture and SGBV to assert and defend their rights to freedom from torture and ill treatment. The project will also give assistance to 120 victims, including providing direct legal support to at least 20 cases to improve jurisprudence in the area. In line with its objectives, the project will also launch an online campaign, starting with the launch of its “#StopTorturein9ja” hashtag and a website where individuals and Civil Society Organisations can report incidents of torture, in order to monitor cases and also hold the perpetrators accountable. One of the strategies of the project is to make incidents of torture and the impunity around it as publicly visible as possible so as to build momentum among the Nigerian justice stakeholders, the political society and electorates on the need to improve accountability for perpetrators of torture. 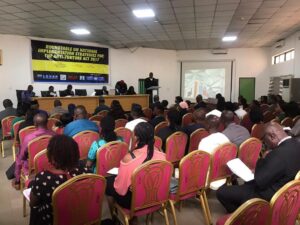 To this end, the project will monitor and document annually, incidents of torture across the country through media reports, reports from CSOs and the work of the Police Complaints System. The project will also strengthen the Police Complaints System to ensure its transparency, accessibility and effectiveness in giving redress to survivors of torture and also in bringing perpetrators to book.

Finally, the project aims to build a sustainable pilot that addresses the needs and capacity of both the supply and demand sides on torture prevention which could be replicated in all police formations and other law enforcement institutions in the country.